IMPORTANCE OF THE TOMATO

The tomato is a major vegetable crop that has achieve tremendous popularity over the last century. It is grown in practically every country of the world - in outdoor fields, greenhouses and nethouses. The tomato plant is very versatile and the crop can be divided into two categories; fresh market tomatoes, which we are concerned with and processing tomatoes, which are grown only outdoors for the canning industry and mechanically harvested. In both cases, world production and consumption has grown quite rapidly over the past 25 years.

Tomatoes, aside from being tasty, are very healthy as they are a good source of vitamins A and C. Vitamin A is important for bone growth, cell division and differentiation, for helping in the regulation of immune system and maintaining surface linings of eyes, respiratory, urinary and intestinal tracts. Vitamin C is important in forming collagen, a protein that gives structures to bones, cartilage, muscle and blood vessels. It also helps maintain capillaries, bones and teeth and aids in the absorption of iron.

Tomatoes are also an excellent 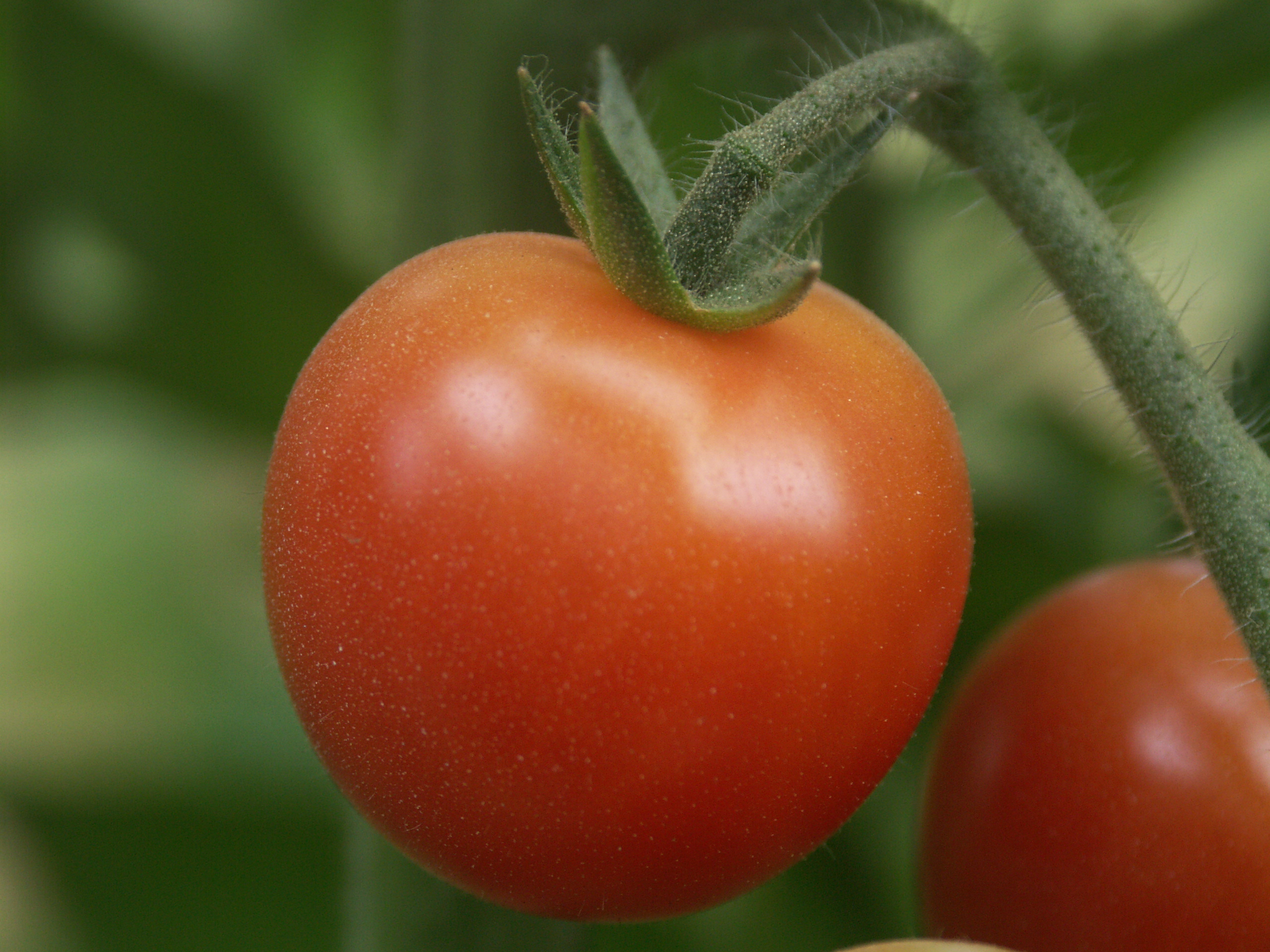 Currently the tomato has a higher consumption rate in more developed countries and is often referred to as a luxury crop. In Israel, for example, the tomato is such an important part of the diet that it is a major part of the food basket, which is used when calculating the consumer price index. In other words, a scarcity of tomatoes can cause the CPI to rise and influence the inflation rate. In developing countries the tomato is becoming a more important part of the food basket but the goal of the farmer is to produce quantity not quality so people can eat.

As varieties improve and new cultivars with better resistance to various diseases are developed, it will become easier to grow the crops in more marginal conditions and the tomato will become a more important part of the diet in poorer countries as well.

Determinate and semi-determinate tomatoes and fresh market tomatoes in the outdoor fields are grown either with determinate bush tomato varieties, (which grow on the ground without staking), or with semi-determinate varieties using the stake and string method. The latter method involves the use of wooden stakes placed within the row of plants and running a number of parallel pieces of string or wire from stake to stake and trapping the new growth of the plant between the strings. This keeps the plants in an upright position preventing the fruit from touching the ground.

Determinate tomatoes require very little plant care and have a predetermined number of clusters, which is not very high. Their yields and quality are usually not very high but the inputs are very low. This type of crop is more popular in developing countries where prices are lower and quality is not a major concern. Semideterminate varieties usually grow to a height between 1 - 2 metres and have more clusters and hence yield than the determinate varieties. The quality is much better because the tomatoes do not lie on the ground. However, neither method involves the removal of side shoots, while the semideterminants require only a minimum of leaf removal. In both of these types the fruit is irregular in shape. i.e. They are more beefsteak than round in shape. 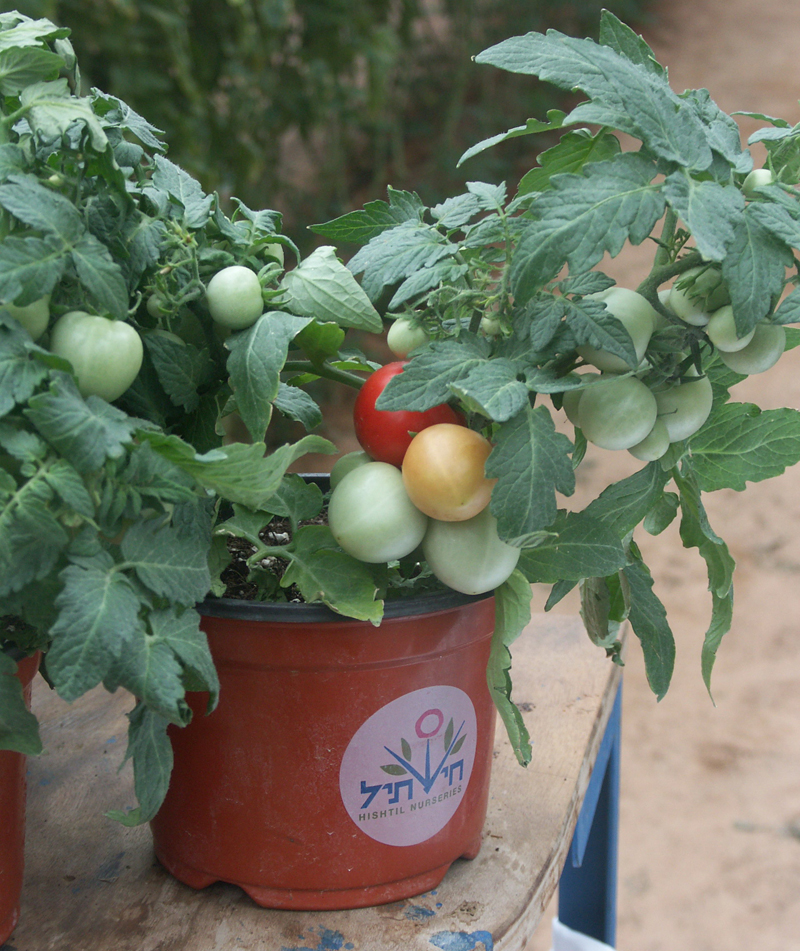 In greenhouses they can be grown in the ground or in soilless media which is often referred to as hydroponics. There is a crop wire above the plants at a height of 2.5 to 3.2 m. String is tied to the wire and then the plant, which is then twisted around the string as it grows. Side shoots or suckers and some leaves are removed on a regular basis. The flower clusters are pruned to a pre-determined number, usually 3 - 5 so as to help the plant maintain balance between the vegetative and generative states. The resulting fruit is more even in size and usually bigger than it would be if all the flowers were left to fruit. The fruit itself maintains size and shape better than the other two types.

Most indeterminate are rounder in shape but there are beefsteak varieties because the American and some European Markets prefer greenhouse beefsteak tomatoes. Indeterminate varieties thus require more work than the other two types but the monetary returns can be much higher.

As greenhouse indeterminate varieties gained popularity (the fruit gets higher prices and demand is constantly growing), people started growing these varieties outdoors using the indoor methods where possible. In many places of the world such as Australia, Sinaloa, and Mexico the growers are highly successful. Nevertheless, there are many circumstances where growing indoor varieties outdoors is very difficult. The climatic conditions may not be good enough or there may be too much insect pressure both resulting in diseases and low quality crops.

The cost of building proper greenhouses may be prohibitive or the problems are such that greenhouses are not necessary and a net house will often suffice. Net houses can be of two types; (a) an insect proof house with 50 mesh net which prevents many insects from entering and has approximately 17 to 20 % shade and (b) an Arava-Feb-7-9-2008-052ordinary black or white net of approximately 25 to 35 % shade. Both types of houses protect the crops from the elements, which include wind, blowing sand, hail, excessive sunshine and insects, although the insect proof is far superior when protecting against some of the major pests such as white fly. There is definitely a worldwide trend to covered cropping especially in tomatoes. When consumers demand better quality they are really saying that they want indeterminate type tomatoes. When a farmer starts to build net-houses and greenhouses his investments and growing costs increase dramatically. He must learn how to optimize revenues and minimize expenses so as to attain the maximum profits.

Why extension help is necessary and who would use it

It is clear that growing tomatoes can be a complicated business. Today's hybrids require more knowledge and skill than ever before. A hybrid variety can be compared to a thoroughbred racehorse. They are high strung, strong and ready to move. However, an inexperienced jockey does not ride a winning race the first few times out and is actually very likely to finish last in the race. It takes time, experience, a large investment, a good teacher and a lot of patience. Growing new hybrid tomato varieties is very similar.

When a farmer or a grower has a sizable investment in something like a new variety of tomato in a covered structure they want to be sure that they achieve the best possible return for their investment. The learning curve for this can turn out to be very expensive as it can take a long time to learn the ins and outs of a new system. Government extension services, which in the past were well organized and able to help growers in these kinds of situations, have had budgets slashed and today have very limited services to offer.

Growers making the switch to new hybrids and new technologies can often get the help they need from the seed companies, local private extension and advisory services and from consulting companies on the internet. The young jockey learning to ride the thoroughbred race horse always has a trainer to help him. The same logic applies to growers trying new varieties and methods. The grower, with proper help and advice, will shorten the time needed to complete the learning curve. He will be able to maximize his profits much quicker by using good professional help and like the well-trained jockey on the thoroughbred, the grower will be well ahead of the pack.

Zvi Howard Wener is well know to farmers in Australia and New Zealand, and as an online crop consultant can be contacted through www.agrisupportonline.com